Political divisions in the US have now descended into the world of art and music as the popular hip-hop group, Public Enemy, has broken up. Fans of hip hop haven’t been this upset and disturbed since two days ago when they were forced to watch Tom Steyer “back that azz up” to a performance by Juvenile.

The cause of the breakup? The Yoko Ono in this case wasn’t an attractive girlfriend, but someone equally sexy and alluring: presidential candidate Bernie Sanders. The two founding members of the group, Chuck D. and Flavor Flav fundamentally disagreed over whether to perform at a Sanders rally.

Chuck D. is a Bernie fan and wanted to go for it. Flavor Flav likely saw what happened to Juvenile after he encouraged Tom Steyer’s azz backing up, and wanted to sit this now out.

Ultimately Chuck D. kicked Flavor Flav out of the band in the most heartbreaking celebrity breakup since Miley and Liam (the second time).

Flavor Flav’s particular flavor that day was salty. He said that Bernie was trying to use his band for an endorsement that he didn’t approve. In fact, Mr. Flav’s lawyer sent the Sanders campaign a statement, ending with: “Bernie, his name is Flavor Flav and he does NOT approve your message!” Wicked burn. (Or “bern” in this case.)

But apparently Chuck D. did approve the message. He said “I dig aspects of Bern. Hate the party Bulsht.” This message is confusing and makes little to no sense (although it’s still more compelling than the platforms of most of the current candidates). Apparently, the fact that someone was “digging aspects of him” was enough for Bernie in this case, and he still decided to have Chuck D. perform.

The rally also included appearances from celebrities like Dick van Dyke. When Van Dyke finally came out, the crowd got excited and started chanting “We love Dick.”

At a rally where a 94 year old actor was endorsing a 78 year old candidate and the crowd was chanting “Dick” (in the old-timey nickname sense of the word rather than the current penis sense), it’s clear why Sanders needed some young blood.

As for Chuck D. And Flavor Flav, Chuck referred to his bandmate as a car that he will “park in the driveway, take off the plates,” and “wait to reRegister it when it’s running right.” Chuck is a talented wordsmith who really followed through with that metaphor. But can someone check on Flavor Flav to make sure he’s not tied up in the back of Chuck’s trunk somewhere? 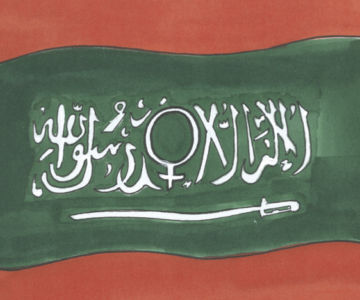 According to the World Economic Forum, Saudi Arabia is the 8th worst country for women’s rights. But, crown-prince Mohammed Bin Salman was not going to let that one slide. In order to improve this shameful performance and to become the undisputed leader, the Saudi government has launched a crackdown against women’s rights activists. In the past week at least eight women were sent to jail, hopefully not without asking for permission, as there would be hell to pay. They were deemed a national security risk, and accused of undermining the stability and unity of the Kingdom. Luckily the Saudi Arabian government was able to dispose of the eight activists who jeopardised the safety of the kingdom, so soon there will be no question that Saudi Arabia deserves the ‘top’ spot.

This has rekindled doubts as to whether it is right that Saudi Arabia has a seat on the United Nations Human Rights Council. Thirty-six of the other countries have criticised Saudi Arabia for the latest arrests, leaving only 10 others who probably felt inspired. Saudi Arabia’s ‘diplomatic’ response was that “any interference in domestic affairs under the guise of defending human rights is an attack on [their] sovereignty”. The audacity of those UN members to question the one country that seems to have a perfect record at identifying human rights whenever they peek to the surface.

The latest developments come only a few months after Saudi Arabia was accused of brutally murdering Jamal Khashoggi – just in case there were doubts that Bin Salman had lost his touch. Human rights organisations responded by saying this “campaign of arbitrary arrests” is a grave concern, thereby failing to see the silver lining that campaigning has now too made it to the streets of Saudi Arabia. Furthermore, these arrests are anything but arbitrary. Provided you don’t do anything outrageous such as voice your opinion, be a woman, visit an embassy or travel abroad without asking your husband first (this one does not apply to gay people), rest assured, you are at no risk of harm. The situation in Iran is becoming stranger with every passing day… two ‘holy-shrine-lickers’ were filmed kissing and licking the Masumeh shrine in Qom declaring ‘I’m not afraid of coronavirus’. Another shrine-liker was captured in a video saying that he will lick the shrine, ‘so the disease can go inside my body and other can visit it with no anxiety’.

An advisor to Iran’s Supreme Leader has actually died from the coronavirus. Hopefully he was more of a hawk than a dove. Also, since the virus has ripped through the country’s prison population, the government has just decided to start freeing prisoners.

Prime Minister Boris Johnson addressed the British public and warned that up to one fifth of workers may have to go on sick-leave and police might have to start ignoring low-level crime to maintain public order… so nothing much is set to change then.

The US Federal Reserve has lowered its benchmark rate by 50 points to a range of 1%-1.25%. In other words, the fiscal measures are designed to prepare for a global recession – so now you can look forward to being poor and diseased.

A student from Singapore was beaten up in Oxford by a group of men who said to him that they ‘don’t want your coronavirus in my country’. Metropolitan Police have described the incident as a ‘racially aggravated’ attack. Ironic how, so far, most spreaders of the virus have been British holidaymakers and businesspeople, not innocent Asian students.

Lastly, fans of James Bond have asked that the release of the latest film instalment ‘No Time To Die’ be delayed due to the outbreak. The requested postponement will then allow us all plenty of time to die of coronavirus. 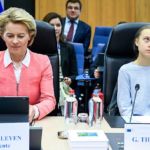 Between a Hot and a Hard Placeby Spitsbergen / March 5, 2020
See You Next Tuesdayby Isabelle Bousquette / March 6, 2020