Earlier today Dick Braine (make of that what you will), resigned blaming internal conflicts and saying he was “powerless to prevent a purge of good members from the party”.

But, ever since its founder Nigel Farage left the party in 2016, it’s been turning father right than anyone has turned before. His reason for leaving was not only Tommy Robinson being named an adviser, but a focus toward Islamophobia within the party.

As a result, and with Nigel’s Brexit party’s success, UKIP lost all of its MEPs in May’s European elections and is currently polling at 1% in the UK for the upcoming elections.

Of course, it’s hard to see what UKIP has been up to since losing all of its seats, and it shouldn’t matter who runs the Poundland sect.

But, Dick hasn’t just been dicking around and managed to get quite a lot of insulting done in a matter of weeks.

First, he declined to attend UKIP’s annual conference due to low ticket sales, which shows even he didn’t want to sit through a speech by Dick. Then, he said people “should no more want Muslims to settle in their country than Nazis”, and he launched an effort to try and ban the Quran.

Islamophobic you say? Wrong! UKIP has had no problem with Nazi sympathisers within the party.

Jack Neill too, who stood for UKIP 2017, had close ties to the British Nazi Party and more recently Mark Meechan, who taught his dog to do a Nazi salute upon being told ‘gas the jews’,  was selected to run for the party.

Former UKIP leader Gerard Batten also critiqued Islam due to its violent and intolerant, which some have also taken as a criticism.

But don’t be fooled. UKIP wears intolerance and violence as a badge of honour!

Steven Woolfe, who was a former leadership favourite, was challenged to a fight by colleague Mike Hookem (didn’t see that coming) following a European Parliament meeting. The reason being that Woolfe was going to defect to the conservative party.

Still, not easy to run a party that prides itself in direct democracy when it’s not represented in a single parliament due to a structural lack of votes. But, just when the EU parliament was finally used to the fact that UKIP-ers had gone back to where they came from, now The Brits can be hoping for the same in the upcoming elections. 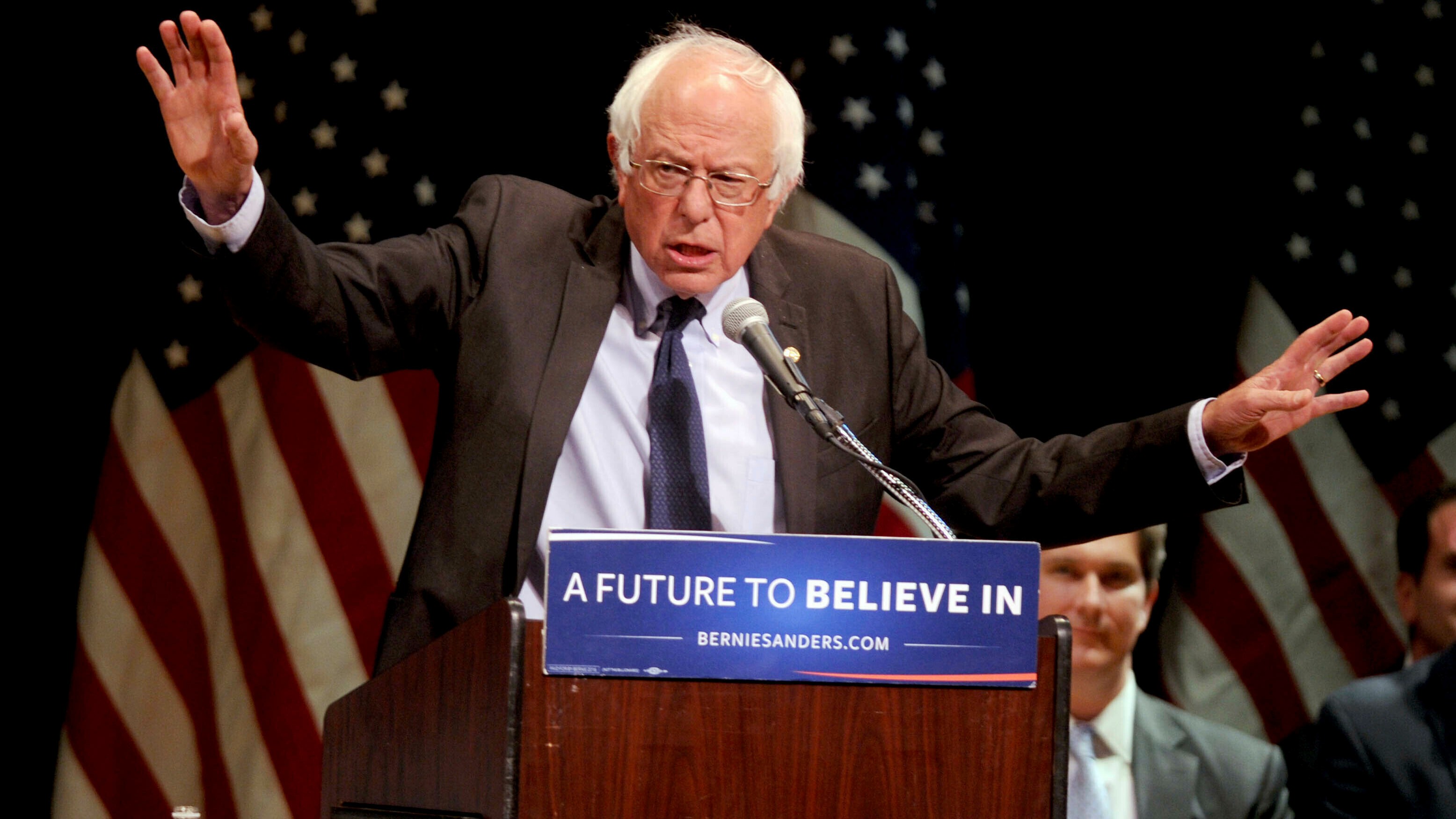 What is the deal with the Green New Deal? Congressional proposals get about as much attention as post-millennium Mc Hammer. Talking about a proposal that has already been declined is unheard of! Yet, here we are.

The GND has garnered a lot of attention, much of it for the wrong reasons. Fox News has been predictably harsh on it, but even liberals have jumped on some unfounded criticism. Banning cheeseburgers and airplanes is nowhere to be found in the proposal. The thing is only 13 pages long, there’s not much room to hide. https://www.congress.gov/116/bills/hres109/BILLS-116hres109ih.pdf

The whole airplane fiasco comes from an ill-advised joke Alexandria Ocasio Cortez, godmother of the GND, had made and Fox unintentionally misinterpreted it. The fact that other news outlets jumped on those claims goes to show the kind of rigorous journalistic research the American media employs before bumbling a story. 13 pages! Really? Nobody could be bothered to read 13 pages? Where the cheeseburger thing comes from, that, we can’t even tell you. Honestly, no idea.

What is mentioned in the GND is that the American government should commit to investing in sustainable methods of transportation to offer an alternative to commercial air travel. In the same way that the car offered us a shit-free alternative to horses. Your patriotic freedom to bounce around at a hernia-inducing 5 miles an hour is still very much intact on most public roads, but you’re not about to saddle up to hit the drugstore.

Now, just because your cheeseburgers and 747s aren’t under attack, doesn’t mean the GND doesn’t raise a few legitimate questions. Where the money is supposed to come from for this massive undertaking is actually not the biggest one. It is, in part, addressed. The plan is to transition the economy systemically so new jobs and opportunities arise as a direct result of the transition. Construction, engineering, installation, etc. A new green economy would create jobs we can’t even imagine now. Just like nobody could have predicted Instagram influenzas becoming a thing ten years ago.

Much more pertinent is questioning how universal access to ‘healthy’ food can be ensured. Healthy food, in this case, mainly referring to pesticide and animal farming practices, is expensive for a reason. It isn’t as financially efficient as blowing up chickens with steroids that would make Ahnold squirm and keeping them stacked on top of each other in enclosures smaller than even the poorest Kardashian’s dog’s sweater closet.

It is also difficult to see how a political system which, as of late, employs ‘shutting down’ as its main form of conflict resolution will ever be capable of organizing the massive infrastructure updates and economic restructuring necessary to achieve net-zero emissions power generation, transportation, and food production.

The GND raises important issues and could help steer the US economy (responsible for a respectable 20% of global carbon emissions) toward a more sustainable future. Having said that, the US achieving a more sustainable future is like the kid at the back of the class who eats paste improving his GPA: it wouldn’t take much, but you can’t really see him putting down the liquid cement bottle anytime soon. 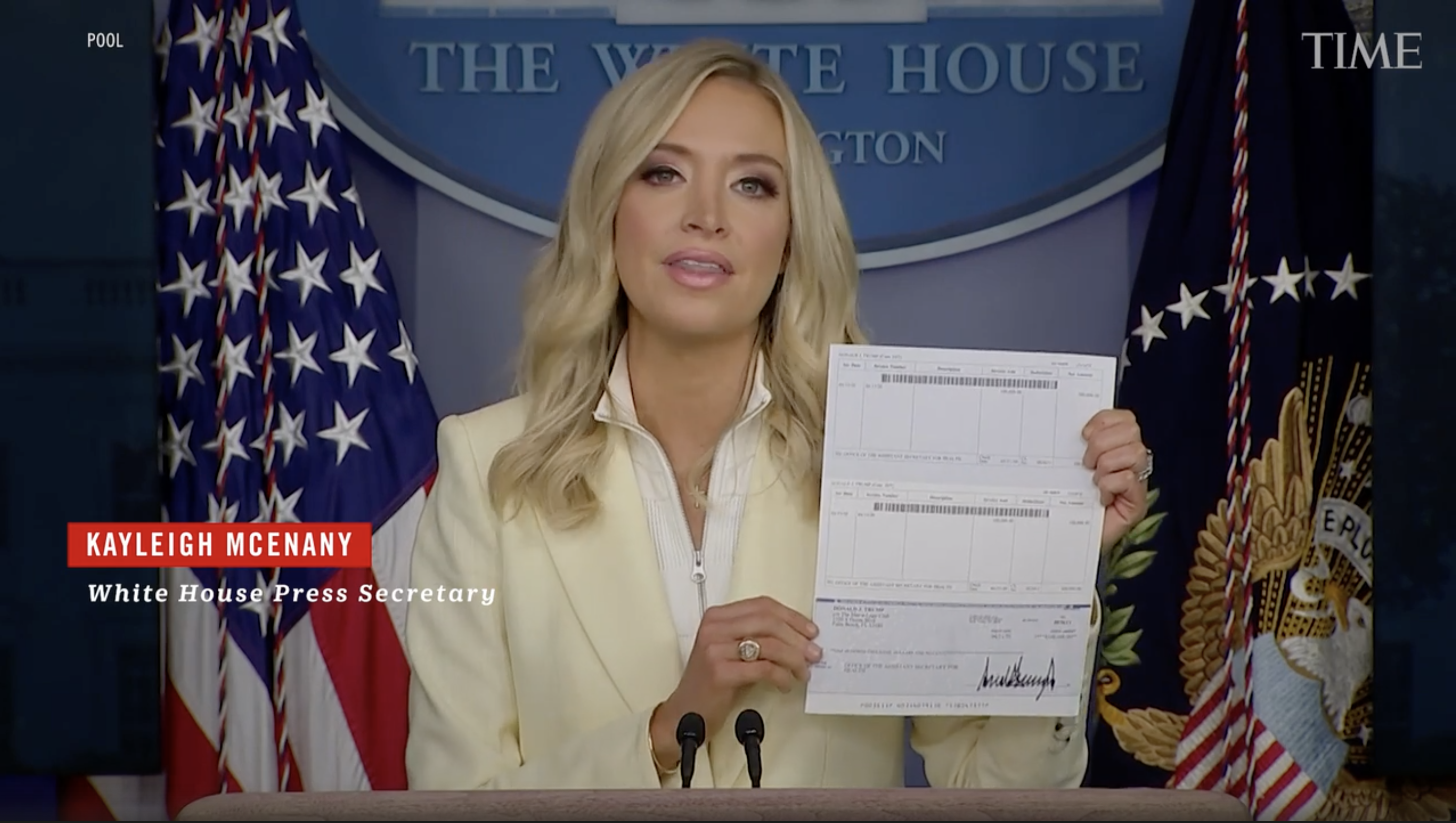 US Press Secretary Kayleigh McEnany made a huge faux pas this week. During a press briefing on Friday May 22nd, she wore a zip-up eggshell white sweatshirt underneath an off-white linen blazer. Not only did the eggshell white majorly clash with the off-white, but also, who wears a a blazer over a sweatshirt? Who did she think she was? Jimmy Fallon in Fever Pitch?

And that wasn’t even her biggest screw up that day. She also accidentally revealed the bank details of the President of the United States.

In an attempt to prove that Donald Trump was donating his entire salary to Coronavirus relief efforts, she held up a check with all his bank account information. Apparently it was a real check from Capital One, the bank whose well-known ads feature Samuel Jackson asking “What’s in your wallet?” Well, now everyone’s knows what’s in Trump’s wallet: a $100,000 check for coronavirus relief along with an American Express black card, a receipt from CVS for Vo5 wax and a picture of himself (probably).

Revealing Trump’s bank account details doesn’t mean he’ll definitely get hacked, but it’ll certainly make it easier. The president and chief executive of the Identity Theft Resource Center, said. “It’s very important for your average person to understand this is not a best practice.” Kayleigh McEnany, however, is not your average person. (If she was, she would’ve been named Kaley instead of Kayleigh).

McEnany graduated from Harvard Law School, where she took several courses in constitutional law and zero courses in deciding whether or not to display your boss’s personal details on live TV.

This faux pas is exactly why televised promotional events usually use giant cardboard checks instead of the real thing. However, they presumably didn’t some huge useless laying around in the Oval Office. After all, they already have Trump.

White House Spokesman Judd Deere released a statement saying, “Leave it to the media to find a shameful reason not to simply report the facts, focusing instead on whether the check is real or not.” Apparently whether something is real or fake isn’t that big of a deal in the White House. Which makes sense since it’s it’s a place full of fake eyelashes, fake noses and fake news.