While the UK is still busy Brexitting and presumably will be for the next few years, the European Council is currently negotiating the new EU budget. The budget in question outlines the EU’s expenditure for 2021-2027 and has led to a fair few member states trying to escape through the bathroom window.

Thus far, the five nations who have forgotten their pin are Germany, Sweden, Austria, Denmark and The Netherlands. They are also known as member states who are net contributors, whereas Southern and Eastern member states are mostly net recipients.

Aside from receiving fewer EU funds, the cheap five are also don’t like where the money tends to end up.

Instead of innovation, education or green energy, most of the money goes to places that have nothing to do with them. Think subsidies for unprofitable gorgonzola farmers and regional funds for the poorer member states, instead of innovation and sophistication.

Of course, there is evidence of corruption and inefficiency in how the budget is spent. No, we don’t mean: “THE EU SPENT €53 OF TAXPAYERS MONEY ON NESPRESSO PODS”, but some of the regional and agricultural funds have gotten in the hands of the corrupt.

Hungary received about €25 billion over the last six years, and a good portion of it has been spent on unnecessary projects to benefit Prime Minister Orban himself. Projects include a €10 million ice rink and €2 million on a ‘vintage railway’ between Orban’s childhood villages.

The EU has been trying to address this, but according to Orban and friends making funds conditional on democracy and other such delights would be ‘attacking member states’. And because the EU is so ‘undemocratic’, they’ve been able to do nothing about it.

To continue the group dinner analogy, it is true that countries like Romania, Hungary and Bulgaria are getting most of the beef for the least money. But, let’s not forget why the EU 27 are sitting at the table in the first place. The Germans and the Dutch are here to sell, and that’s what they’ve been doing.

For every train station built in Victor Orban’s home town, Germany sells a few million Audis to his dodgy friends.

Thanks to the largest free trade block in the world, 71% of Dutch goods and 59% of German goods are exported to other EU countries. On the whole, the cheap five only spent 0.8% to 0.7% of their GDP on the EU budget, while estimated gains from selling potatoes and microchips at no cost to the 26 other countries are around nine-fold.

Think of it this way, Belgium spends about the same percentage of its national budget on sports and double that on its military, as it does on the EU. You be the judge on what money’s better spent. Wait, what? There’s a Belgian army?

So, while budget scrutiny is right to avoid more multi-million-euro ice rinks in Orban’s back garden, the EU does give bang for your buck. Otherwise, the Brits wouldn’t have spent three times what they used to pay the EU on Brexit contingency planning.

Meanwhile, Boris is still lurking at the bar threatening to leave unless they’re given a menu that exclusively consists of scones, luke-warm beer and shepherd’s pie. The Prime Minister of Israel faces trial in Jerusalem this week for bribery and corruption. Benjamin Netanyahu spent the time before his corruption trial launching a Twitter smear campaign against his Attorney General prosecuting him. (Unlike the former governor of Illinois who spent the time before his corruption trial competing on the Celebrity Apprentice). Unfortunately Netanyahu’s smear campaign failed to gain traction. Maybe he would’ve been more successful if he’d asked FuckJerry to post a meme making him look cool.

Netanyahu seems upset that he’s facing charges of bribery and fraud. But not nearly as upset as he is about the fact that someone might take an ugly picture of him in the courtroom. He even asked to opt out of the opening session to avoid the photo. Apparently he didn’t realise that a criminal trial isn’t really an “opt in / opt out” kind of thing.

Outside the courthouse, anti-Netanyahu demonstrators soberly watched as their country’s highest leader faced trial during a truly dark moment in the nation’s history. Just kidding. They cheered and popped champagne. To be honest, it was less like a serious political protest than a yacht party in Ibiza.

Netanyahu’s crimes were twofold. First, he accepted expensive gifts including jewellery and cigars  in exchange for political favours. The most expensive cigar you can buy is still only like $50. So it’s like he lost all political integrity for the price of three craft cocktails.

He also offered media outlets financial incentives in exchange for positive press coverage. Ironically, his desperate desire for newspapers to write good things is exactly the thing that made newspapers write bad things about him.

Israeli prosecutors have 300 who will testify against Netanyahu. (Which is more than the amount of people the listened to Harry Styles’ latest album).

If Netanyahu is convicted, he’ll have to resign and spend up to 10 years in prison. The upside is that at least by the time he gets out, this whole tie-dye fad will be over. 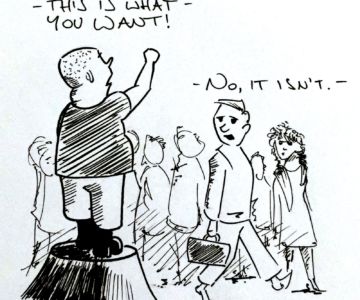 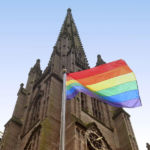